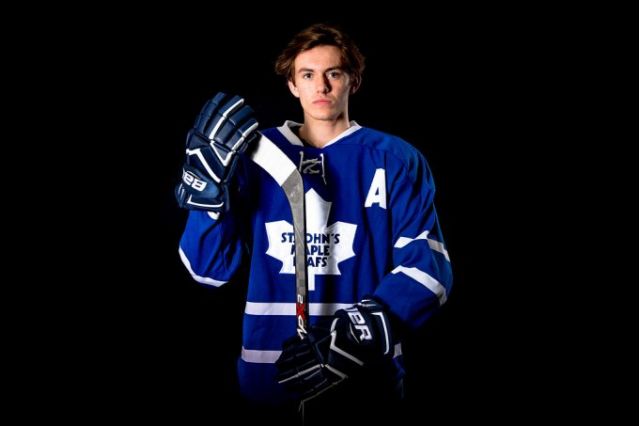 Jay Henley in Toronto this weekend with almost 100 other young scholars from across Canada A Grade 12 student at Holy Heart of Mary High School in St. Johnâ€™s is in Toronto this weekend competing with 87 students from across the country for 35 scholarships worth $100,000 each. â€œItâ€™s a big honour,â€ said Jay Henley. Just being picked as a finalist out of over 5,000 applications means Henley will at least walk away with a $5,000 scholarship from the Loran Scholars Foundation. The foundation looks for applicants who display integrity, courage, grit and personal autonomy â€” all in addition to maintaining a minimum cumulative average of 85 per cent. The fact that Henley has made it to the finals is no surprise to Holy Heart principal Sheldon Barry, who says it is a â€œprivilegeâ€ to have Henley as a student. â€œJay lights up a room with his smile and outgoing personality,â€ said Barry. â€œWhatâ€™s most striking is that he always thinks of others in his decision-making process. His tireless energy is to be commended.â€ Henleyâ€™s consideration of others is undoubtedly what stood out to the selection committee as well. He is president of Holy Heartâ€™s Best Buddies program, which helps to establish friendships between people with and without intellectual or developmental disabilities in order to make schools more inclusive and accepting of people with disabilities. â€œDisability hits extremely close to home, as my sister Sarah is severely mentally and physically handicapped,â€ said Henley. â€œI have been blessed to have grown up with Sarah. She faces challenges in most aspects of life, but she always has a smile on her face and enjoys the small things that many people take for granted.â€ Henley also established a volunteer outreach arm for the St. Johnâ€™s Maple Leafs Midget AAA hockey team, of which he is alternate captain, called â€œLeafs Legacy.â€ The goal is to plan three initiatives every year to help others. Already, the team organized a donation of over 100 stuffed stockings to Choices for Youth this past Christmas, as well as a food drive for the Gathering Place. â€œIt is mere luck of birth and circumstance that I do not need these services,â€ he said. Moreover, Henley embodies the foundationâ€™s quest for a scholar with courage and grit. While he is an avid hockey player, his elite-level hockey ambitions did not come without hurdles. Henley tried out for the provincial Hockey NL under-14 team and under-15 team, but did not make the cut both years. So, he consistently sought out advice about his weaknesses from the coaching staff and trained rigorously for the under-16 team with those criticisms in mind. â€œI set my mind to make this team and although I most definitely struggled along the way, I was able to eventually reach my goal and represent my province proudly.â€ On top of his other volunteer work and extracurricular activities, Henley is school council president and head of Holy Heartâ€™s Relay for Life committee. Henley and two other finalists from the province â€” Billy Barnes of Birchy Head and Liam Oâ€™Brien of Cape Broyle â€” will find out how they fared in the intensive finalist interviews on Sunday. However, Henley says whether he walks away with one of the $100,000 scholarships or not, he is thankful to have the experience. â€œIâ€™m hoping to try and take in as much as I can in two days to kind of help me just grow as a person, and learn some life lessons.â€ Upon graduation, Henley plans to study engineering. He has already been accepted to several universities, but hasnâ€™t yet decided which one he will attend.

Atlantics to be hosted by Western Kings